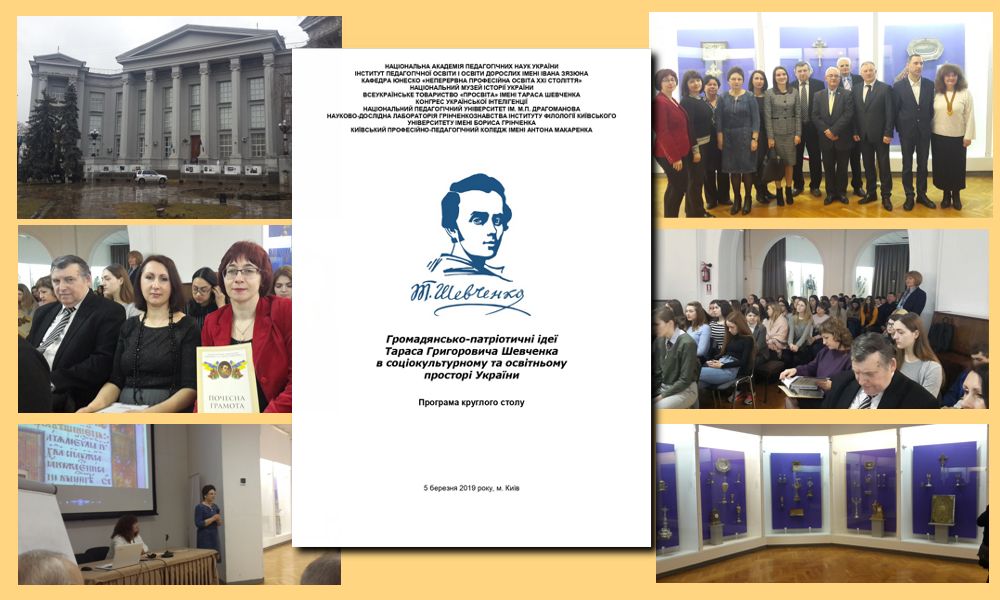 On March 5, 2019 was held a theoretical and practical seminar on Civic and patriotic ideas of Taras Shevchenko in the socio-cultural and educational space of Ukraine (Kyiv, Ukraine), dedicated to the International Mother Language Day 2019 and to the 205th anniversary of the Taras Shevchenko birth. Seminar was held at the National History Museum of Ukraine.

The initiators of the event were the UNESCO Chair on Lifelong Professional Education in the XXI Century and the Ivan Ziaziun Institute of Pedagogical and Adult Education of the National Academy of Educational Sciences of Ukraine.

Taras Shevchenko is a National hero and symbol of Ukraine.

Taras Shevchenko was a Ukrainian poet, writer, artist, public and political figure, as well as folklorist and ethnographer. His literary heritage is regarded to be the foundation of modern Ukrainian literature and, to a large extent, the modern Ukrainian language. Taras Shevchenko’s writings formed the foundation for the modern Ukrainian literature to a degree that he is also considered the founder of the modern written Ukrainian language. Shevchenko’s poetry contributed greatly to the growth of Ukrainian national consciousness, and his influence on various facets of Ukrainian intellectual, literary, and national life is still felt to this day. Outside of Ukraine and the former USSR, monuments to Shevchenko have been put up in many countries, usually under the initiative of local Ukrainian diasporas. There are several memorial societies and monuments to him throughout Canada and the United States, most notably the monument in Washington, D.C., near Dupont Circle etc.

The main discussions at theoretical and practical seminar were issues of the status of Ukrainian language as state language; languages of other nationalities and indigenous languages, and  how to ensure strengthening respect and ensuring full development of it.

Participants of theoretical and practical seminar have been more than 100 people, such as: NGOs representatives, academics, students, postgraduate students, researchers, university lecturers, teachers of general and pre-school institutions, trainers etc.

The co-organizers of the seminar  were:

During the seminar, the mother language and multilingual education issues were discussed on:

The results of the held seminar were practical recommendations on Civic and patriotic ideas of Taras Shevchenko in the socio-cultural and educational space of Ukraine as important and value things of mother language and indigenous languages in the modern Ukraine.