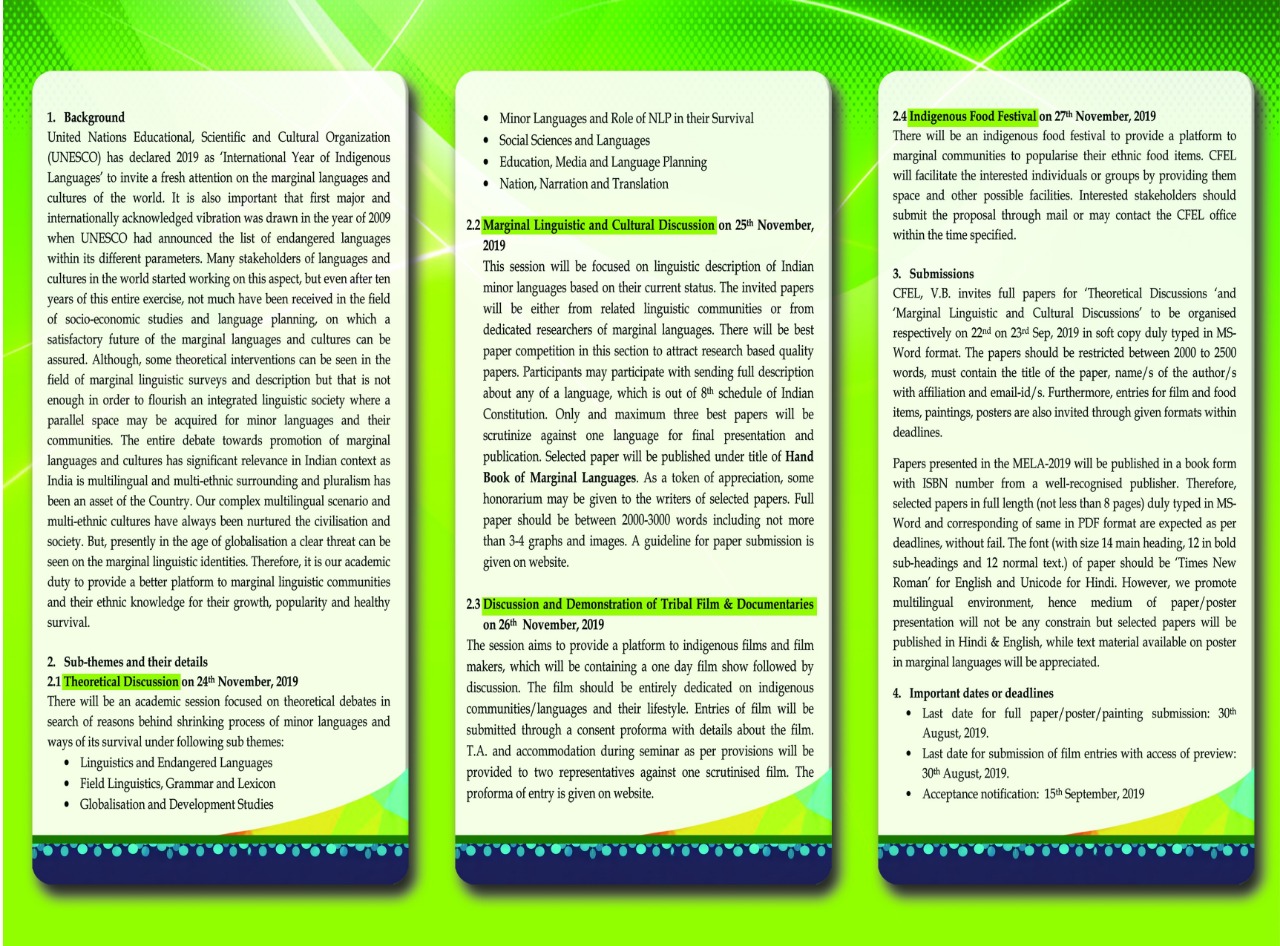 United Nations Educational, Scientific and Cultural Organization (UNESCO) has declared 2019 as ‘International Year of Indigenous Languages’ to invite a fresh attention on the marginal languages and cultures of the world. It is also important that first major and internationally acknowledged vibration was drawn in the year of 2009 when UNESCO had announced the list of endangered languages within its different parameters. Many stakeholders of languages and cultures in the world started working on this aspect, but even after ten years of this entire exercise, not much have been received in the field of socio-economic studies and language planning, on which a satisfactory future of the marginal languages and cultures can be assured. Although, some theoretical interventions can be seen in the field of marginal linguistic surveys and description but that is not enough in order to flourish an integrated linguistic society where a parallel space may be acquired for minor languages and their communities. The entire debate towards promotion of marginal languages and cultures has significant relevance in Indian context as India is multilingual and multi-ethnic surrounding and pluralism has been an asset of the Country. Our complex multilingual scenario and multi-ethnic cultures have always been nurtured the civilisation and society. But, presently in the age of globalisation a clear threat can be seen on the marginal linguistic identities. Therefore, it is our academic duty to provide a better platform to marginal linguistic communities and their ethnic knowledge for their growth, popularity and healthy survival.

Any comprehensive study of a language is not limited to only its structure, but also demands an enquiry about socio-economic setting of that particular language. Of course, form and structure are basic input for any linguistic study, but it should not be limited under Linguistics, as many things are being changed rapidly around us; hence, a cross-disciplinary approaches and fresh sight to examine languages and its surroundings are needed, thus responsibilities of linguists are becoming more accountable. Now involvement of a language in education, research & development, employment, and market is directly related to its survival. Simultaneously, medium of education & research, information technology and operating systems are building a better path for a language and advancing their potential. Thus, study on language endangerment will not be completed only under preview of traditional linguistic approaches and paradigms.

In the contemporary multilingual scenario there are around 6000 languages spoken across the world but there is a widespread consensus that, by end of this century, about 90% of languages will disappear or become extinct entirely, replaced by more widely used and economically productive languages. This situation is generally referred to as language endangerment, a term used broadly for languages, which are threatened with absolute loss. Many culturally rich languages have already been disappeared from society or real use. The shrinking process in language domain is clear alarm for a society to expand the use of mother tongues in their practices through regular language domains and save the biodiversity around society. There is no doubt that like natural disappearance of languages and civilizations, extinction of living organisms is a natural event happening in a routine manner.

India is viewed as a pluralistic society that is supportive of all languages – big or small. The texture of Indian society has various deep colors from its root, which are flourishing at least at the current stage, without strict borderline between language, culture, and ethnicity. The practices of life are directly associated with biodiversity and natural resources available around our livelihood, but now the invisible threats from globalisation has resulted in complete loss of pluralism. Therefore, a red signal may be seen in the path of marginal languages from now onward in going out of their real or indigenous form. Indian constitution is committed to protect the language rights of all, including the right to mother tongue education. However, the education system has encouraged the growth of dominant languages more, and most of the smaller languages are not included in educational practices. Internet, which is a strong vehicle of globalisation, has always promoted dominant languages; consequently digitalisation process is another threat zone for Indian marginal languages.

Now there is an alarming situation in front of academics and humanity to search appropriate answers for shrinking linguistic diversity and regional life styles. Aiming these questions, CFEL has planned a four days’ international academic and cultural milieu titled Marginal Ethnologic and Linguistic Annals: MELA-2019 to highlight the practical issues and to sensitize and attract the academicians, filmmakers, entrepreneurs and young scholars involved in language, culture, cinema, food processing, digitalisation and other related areas of linguistic and socio-economic  studies for marginalized communities.

There will be an academic session focused on theoretical debates in search of reasons behind shrinking process of minor languages and ways of its survival under following sub themes:

This session will be focused on linguistic description of Indian minor languages based on their current status. The invited papers will be either from related linguistic communities or from dedicated researchers of marginal languages. There will be best paper competition in this section to attract research based quality papers. Participants may participate with sending full description about any of a language, which is out of 8th schedule of Indian Constitution. Only and maximum three best papers will be scrutinize against one language for final presentation and publication. Selected paper will be published under title of Hand Book of Marginal Languages. As a token of appreciation, some honorarium may be given to the writers of selected papers. Full paper should be between 2000-3000 words including not more than 3-4 graphs and images. A guideline for paper submission is given below:

The session aims to provide a platform to indigenous films and film makers, which will be containing a one day film show followed by discussion. The film should be entirely dedicated on indigenous communities/languages and their lifestyle. Entries of film will be submitted through a consent proforma with details about the film. T.A. and accommodation during seminar as per provisions will be provided to two representatives against one scrutinised film. The proforma of entry is given below:

There will be an indigenous food festival to provide a platform to marginal communities to popularise their ethnic food items. CFEL will facilitate the interested individuals or groups by providing them space and other possible facilities. Interested stakeholders should submit the proposal through mail or may contact the CFEL office within the time specified.

CFEL, V.B. invites full papers for ‘Theoretical Discussions ‘and ‘Marginal Linguistic and Cultural Discussions’ to be organised respectively on 22nd on 23rd Sep, 2019 in soft copy duly typed in MS-Word format. The papers should be restricted between 2000 to 2500 words, must contain the title of the paper, name/s of the author/s with affiliation and email-id/s. Furthermore, entries for film and food items, paintings, posters are also invited through given formats within deadlines.

Papers presented in the MELA-2019 will be published in a book form with ISBN number from a well-recognised publisher. Therefore, selected papers in full length (not less than 8 pages) duly typed in MS-Word and corresponding of same in PDF format are expected as per deadlines, without fail. The font (with size 14 main heading, 12 in bold sub-headings and 12 normal text.) of paper should be ‘Times New Roman’ for English and Unicode for Hindi. However, we promote multilingual environment, hence medium of paper/poster presentation will not be any constrain but selected papers will be published in Hindi & English, while text material available on poster in marginal languages will be appreciated.

The registration fee can be submitted through RTGS with following bank details:

Individual registration is compulsory in case of joint paper and only main presenter will be eligible for T.A. and accommodation. Registration fee will include certificate, working lunch and breakfast. Share basis accommodation may be provided to outstation delegates as per availability on ‘first come, first serve’ method. Early paper submission and registration will be an advantage to secure accommodation.

Can You Really Speak Your Language? Reality TV Show Season I